Having co-founded the group with Jane Yilmaz in 2017, she heads up the RFUK team. Since its
inception it has developed from a small private FB group to a Community Interest Company that is
the supports families affected by UK Spouse visa rules. Coming from a background in television as a
Producer/Director, she has overseen a variety of projects and campaigns in and out of Reunite
Families UK and successfully created working relationships with UKVI, migration organisations,
immigration experts, academics and press to help grow the CIC and raise awareness in the public
domain having got the issue on mainstream news and in the press. Her dedication and motivation
are fuelled by personal experience of the rules and the refusal of her own husband’s visa that led to
almost a 2 year battle with the Home Office.

Jane Yilmaz – Director
Jane manages RFUK with Caroline and Robert and works across Reunite Families UK website. With
personal experience of the family migration system, Jane knows only too well the damage the
process can have on couples and children. Having trained as a teacher, she has since left this role
and gone back to her roots as a tennis coach.

Robert Elston – Director
Robert has personal experience of the visa system, having dealt with a visa refusal by the home
office. Robert has been the Chief Executive of Status Employment a specialist health well-being and
employment charity for disabled people. He has also been involved with the British Association for
Supported Employment (BASE) and is their Treasurer. He is also director of Inclusive Trading Ltd the
training arm of BASE. In his role in BASE he has been the European representative and has
represented BASE on the board of the European Union of Supported Employment (EUSE), where he
was a Vice President for 6 years and still remains on the board. Robert works closely with Caroline
and Jane, in offering support and guidance when needed as well as overseeing the financial side of
Reunite Families and supporting the financial and administration staff member. Carlos comes from a business background with experience in both government and private sectors.
Currently working as a finance co-ordinator for the Institute of Asset Management, he manages
RFUK’s books. Hailing from Ecuador in South America, he is a migrant and Caroline’s other half and
knows very well how harsh the rules are. 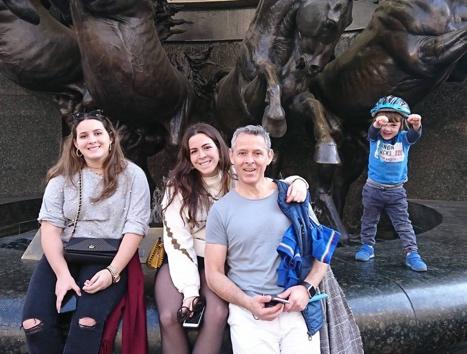 Ella D – Community Outreach Co-Ordinator/Case worker
Ella has a PhD in Clinical Psychology, a BA in Child Development, and an HND in Business and
Finance. With first-hand experience of the family migration system, she knows only too well the
impacts of the rules on people and families she uses both her professional and personal experience
to assist our members. Ella has considerable knowledge of the welfare system, safeguarding,
signposting and support services and is helping RFUK develop its community network across the UK
and in turn provide more on the ground support for our members.

Steven Green – Member Support and Policy
Steven has campaigned against the minimum income requirement rules since July 2012, when he
and his wife were going through the process and has been working for a more humane system ever
since. Steven works in IT and is a Trustee of the charity BritCits and is our font of MIR and MP
knowledge and over the last 10 years has become very well versed in the Spouse Visa rules. Not one
to blow his own trumpet – so we will – he was also nominated for a Sheila McKechnie Special
Recognition Award in 2013.

Phavine Phung-Laker – Research and Administration Coordinator
Phavine came to the UK from Cambodia to study and is now married to a Brit. She has a Masters in
Gender, Media and Culture Studies and she is now doing a PHD in Visual Sociology at Goldsmiths
University of London. As well as this she volunteers part time for RFUK as a case worker and
researcher. She has also volunteered for Hackney Migrant Centre as a Case Worker.